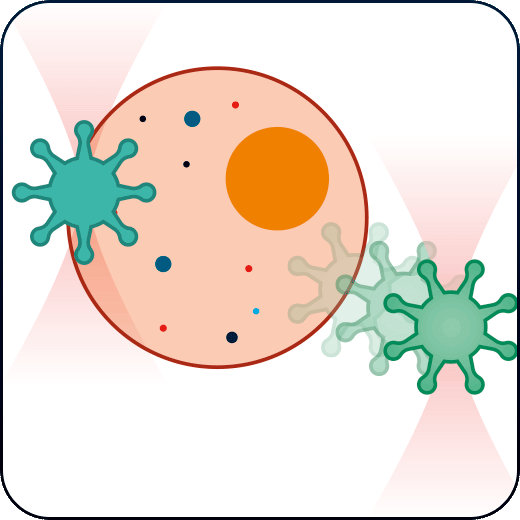 Use SENSOCELL to measure immune cells Interaction forces in in vitro and in vivo conditions:

The study of cell-cell interactions is of great importance in research fields like immunophysics. Our optical tweezers platform SENSOCELL allows trapping and manipulating multiple cells simultaneously in such a a way that cell-cell contacts can be easily established in a precise manner. Users can control the cells’ orientation and contact time. In this example (Fig. 1) we show how contact is engaged between a lymphoma cancer cell and a T-cell using two optical traps. The first trap (trapping the cancer cell) is fixed while the second trap (over the T-cell) is moved using the “click and drag” mode. The T-cell is moved towards the cancer cell and contact is established. After 10 s, the T-cell is pulled away and an adhesion force is measured. 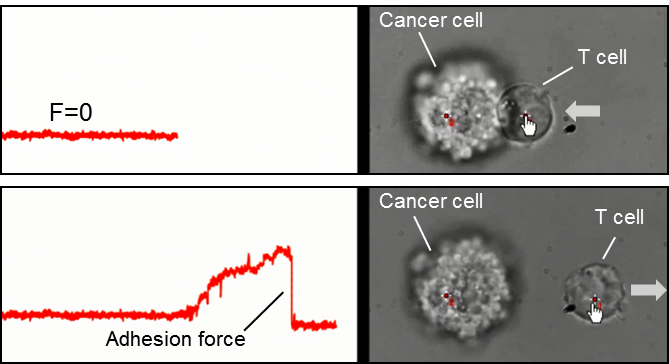 Fig.1 Cell-cell interaction established between a lymphoma cancer cell and a T-cell. Initially, the measured trapping force is zero (red line plotted data). After 10 s, the T-cell is pulled away and an increasing force is measured. When the applied force is high enough to break the bond between the two cells, the measured force drops to zero. In this case the adhesion force was measured to be 21 pN. In collaboration with Dr. Carlos Barcia from UAB.

The same type of experiment was carried out for two different engineered CAR-T cell lines and T-cells in collaboration with Dr. Juan Manel Otero from the Hospital Clínic of Barcelona:

Fig.2 Statistic of cell-cell adhesion forces measured for lymphoma cancer cells in contact with T-cells and CAR-T cells after a contact time of 15 s. Each bar represents the data for a set of 9 different samples of each cell type.

Do NOT follow this link or you will be banned from the site!