Measure cell motility forces of sperm cells, flagellated bacteria or other microswimmers and study the dynamics of their movement with SENSOCELL optical tweezers. 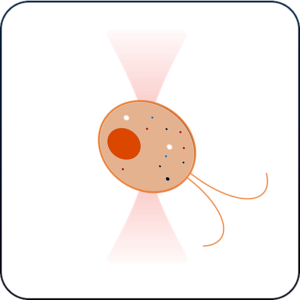 Investigate cell motility force dynamics of sperm cells and other microswimmers with SENSOCELL optical tweezers. Trap and manipulate cells to perform real-time tracking of their motility forces in an absolute and direct way and study the flagellar beating dynamics of your samples. Simultaneous force measurements can be obtained for multiple microswimmers controlling multple optical traps and our synchronized force spectroscopy module. Furthermore, thanks to the built-in active microrheology routine, SENSOCELL allows measuring the medium viscosity of your biological system and study its influence in your motility assays.

This application example is part of a work from Wylie Ahmed’s Lab (California State University, Fullerton). In this work, the authors presented a study of direct measurement of motility forces generated by Chlamydomonas microswimmers and interpreted the dynamics using simulations of self-propelled particles.

For this purpose, the authors used one of our optical trapping instruments to experimentally measure the stochastic force dynamics of a Chlamydomonas microswimmer using our exclusive light momentum based force spectroscopy module. Using force spectrum data of an actively swimming Chlamydomonas and following a thermodynamic approach, the authors quantified the non-equilibrium activity of the microswimmer.

The authors show that Chlamydomonas exhibit complex oscillatory force dynamics with magnitude of tens of pNs, and rotational dynamics of 1-2 Hz, with an an average power dissipation of approximately 5 fW.