Mechanoreceptors of the cell membrane

Mechanoreceptors or mechanosensitive cell membrane receptors such as integrin are key for cellular processes like cell-cell, cell-ECM adhesion or cell migration while mechanosensitive ion channels regulate the cellular response to external mechanical stimuli. With SENSOCELL optical tweezers it is possible to study the kinetics and biological forces involved in such processes in a direct and absolute way. 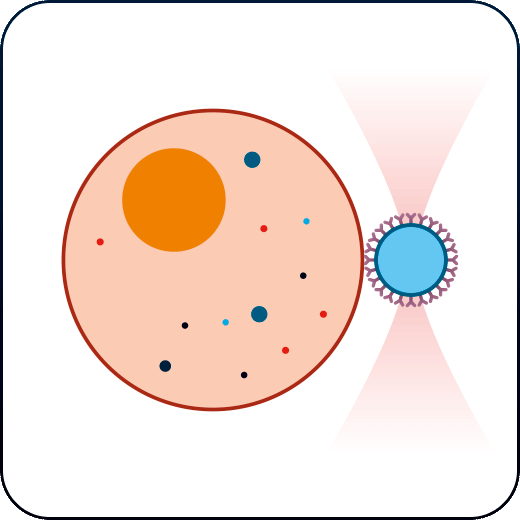 Investigate cell membrane mechanoreceptors dynamics and mechanosensitive ion channel activity with SENSOCELL optical tweezers by applying and measuring forces directly on the cell membrane or trapping functionalized microspheres that adhere to the cell membrane. Real-time bead-cell adhesion force readings at high temporal resolution will give you insights of the dynamics of transmembrane mechanoreceptors that govern cell-ECM interactions or cell migration processes. Thanks to its extensive and precise optical trapping capabilities, SENSOCELL is an ideal solution to mechanically stimulate the cell membrane and study mechanosensitive ion channels activity in cells, especially when the system is combined with high-speed fluorescence imaging like spinning disk confocal microscopy.

This application example is taken from a work from the Neurophotonics and Mechanical Systems Biology Lab at the Institute of Photonic Sciences (ICFO). In this work, the authors investigated the mechanics, molecules and neurons responsible for proprioception in Caenorhabditis (C.) elegans to gain insight into how mechanosensation shapes the orbital trajectory to a well-defined limit cycle. The authors found that found that proprioceptors (sensory mechanoreceptors that respond to movements and position of the body) were activated under compressive stresses in both vivo and in vitro experiments.

For the experiments in vitro, the authors used SENSOCELL to optically trap microspheres and extrude membrane tethers from isolated DVA neuron axons. For this purpose, the authors programmed their custom pulling routines with our LightAce software SDK to control the beads displacement and pulling velocity ranging from 5 to 80 μm/s for each subsequent tether pulling step (see more information on tether pulling routines here). In this way, they could apply positive and negative tension gradients to the isolated axons and simultaneously image the resultant Ca2+ ion channel activity using confocal microscopy.

From these experiments, the authors observed that the increment of Ca2+ signals preferentially occurred during the relaxation phase of the tether pulling force-distance curves, indicating that negative tension gradients can induce neuronal activity, similarly to the axon compression in vivo tests.