Study the role of cell nucleus mechanotransduction pathways in cellular mechanosensation and how the nucleus mechanical properties regulate cellular activity such as cell migration, development or disease with SENSOCELL optical tweezers. Create your own Creep and Stress-Relaxation routines for intracellular characterization using SENSOCELL’s force clamp mode and automatized trap motion. 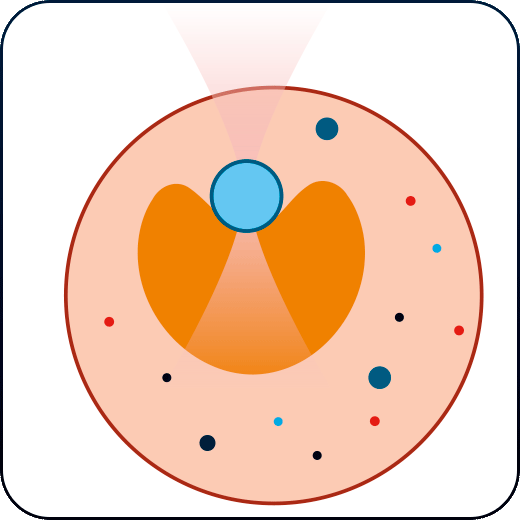 The role of the cell nucleus in mechanotransduction

Study the role of the nucleus in cellular mechanotransduction and how it is connected to the cytoskeleton with SENSOCELL. Perform experiments using isolated nuclei as samples or in in vivo models such as adhered, suspended or confined cells, even inside living embryos. With SENSOCELL, you can easily program your own routines using our LightAce SDK to mechanically stimulate the cells nuclei while recording force and displacement data and do everything with simultaneous fluorescence imaging to get a whole picture of the ongoing processes.

Indent and stretch the cell nucleus using internalized microspheres or internal cellular structures such as lipid droplets as probes while monitoring the involved time-force and time-displacement curves. In this way, it is possible to extract information of the cell nucleus stiffness and viscoelastic properties. In a similar fashion, other subcellular structures can be trapped and used as probes to characterize the cellular medium in creep and stress-relaxation tests (see application example 1). To see examples of active microrheology experiments in cells, please visit our microrheology application page.

Video of a Creep & Stress-Relaxation test performed inside a living yeast cell.

In this example, the vacuole of a yeast cell was optically trapped and used to probe the cellular medium in two ways:

Next, a Stress-Relaxation test is launched using the same trapped vacuole as a probe. In this case, a trajectory is applied to the optical trap to move it 300 nm to the right in 0.1 s while the applied force is tracked. A peak in the force is observed when the trap position is shifted followed by a relaxation of the force takes place while the trap remains in a fixed location.

The following images and videos are courtesy of the labs of Dr. Verena Ruprecht (Centre of Genomic Regulation, CRG), Dr. Stefan Wieser and Dr. Michael Krieg (Institute of Photonic Sciences, ICFO). These labs collaborated in a work where SENSOCELL optical tweezers was used to indent stem cell nuclei in suspension or confined conditions using cell extracts from zebrafish embryos as biological samples. This example is taken from a work by these authors published in Science and dealing with the role of nucleus mechanotransduction pathways to control cell deformation behavior and cell migration plasticity.

Here, the authors present a protocol to investigate the intracellular mechanical properties of isolated embryonic zebrafish cells in three-dimensional confinement with direct force measurement by an optical trap.

To carry out the experiments, the authors used SENSOCELL optical tweezers to optically trap and manipulate 1 μm fluorescent beads to indent the nuclei of stem cells extracted from zebrafish embryos. The beads had been previously internalized into the 1-cell early embryos. A stress-relaxation routine was programmed to carry out the experiments, consisting in predefining an automatized motion of the trapped microspheres. In this setup, the SENSOCELL optical tweezers platform was combined with a spinning disk confocal unit, thus allowing real-time fluorescence imaging of the stretched nuclei during the experiments. 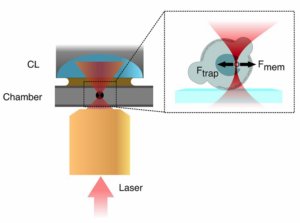 Fig. 1 Left: experimental sketch: injected microspheres are optically trapped to indent the nuclei of suspended and confined cells from Zebrafish embryos. Right: cell nucleus indentation experiment performed with SENSOCELL optical tweezers system. The trapped microsphere is pushed against the nucleus (in blue) and moved away after some seconds. The cell (in green) exhibits a bleb at lower side during the measurement.

Fig. 2 Left: time-position curve of the optical trap for one of the nucleus indentation experiments. The trapped microsphere moves 5 microns towards the cell nucleus in 3 s, indenting it. At t=13s, the optical trap goes back to its original position. Right: force profile normalized to indentation depth for the same experiment as Fig. 3. Once the microsphere remains still indenting the cell nucleus (t=3 s), the force exhibits a characteristic relaxation curve. At t=13s, the particle is moved away and the force drops down to zero.

Below, we can see some results obtained from an exponential-decay fitting of such force relaxation curves for cells in suspension and cells confined in microchambers. From these fittings the authors obtain the characteristic relaxation time and the static force given by the residual stress applied onto the nuclear membrane for both conditions.

Similar data to that of the previous example has been obtained in preliminary tests using HELA cancer cells and RPE-1 human retina cells. For these tests, samples were kindly provided by Dr. Aastha Mathur from M. Piel’s lab at Institut Curie. In this case, 3μm beads were internalized in the cells via phagocytosis: 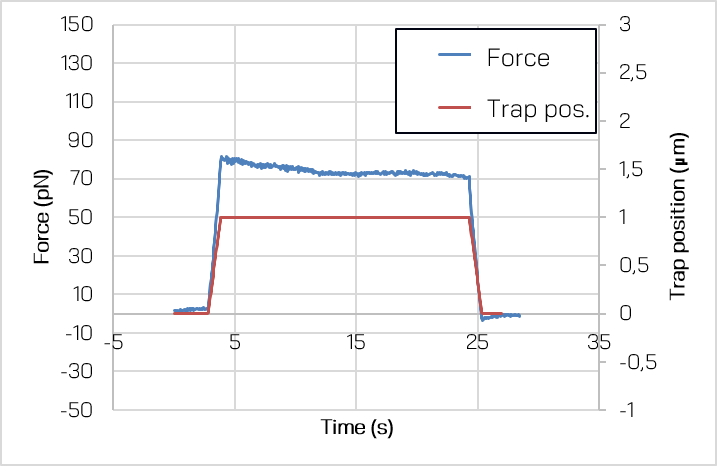 ublications related with cell nucleus mechanotransduction experiments with our technology:

Impetux at Nanoengineering for Mechanobiology N4M 2022