IMPETUX will be at Trends in Optical Micromanipulation III

We are pleased to announce that we will be giving the following talk:

And presenting the following poster:

We will be also  exhibiting a set up with a very interesting demo that will show the potentials of our technology!.

IMPETUX will be giving the following talk at TOM III: Trends in Optical Manipulation

TIME TO BE DETERMINED

Forces exerted by optical tweezers can be measured by tracking the rate of momentum transfer between the trapping beam and the sample1-3. Although it has not been brought to its full potential yet, probably due to practical difficulties when combined with high-NA optical traps, this route shows promising to overcome some important limitations of the typical approach based on trap stiffness calibration. Using this approach, we show here the feasibility of measuring forces on arbitrary biological objects inside cells without an in situ calibration. The instrument can be calibrated by measuring three scaling parameters that are exclusively determined by the design of the system. The conversion factor from volts to piconewtons is thus independent of the physical properties of the sample and the surrounding medium. We prove that this factor keeps valid inside living cells through the comparison with an alternative calibration method developed in recent years for viscoelastic media. Finally, we apply momentum-based measurements to determine the stall forces of both kinesin and dynein in living A549 cells. 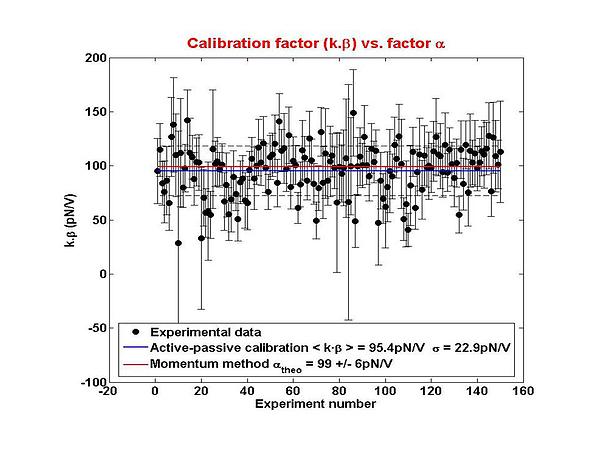 Experimental results show that the sensor’s absolute calibration equals the conversion factor from volts to piconewtons obtained through an alternative method for viscoelastic materials.

And will be presenting the following poster

In this work, we present and discuss several issues that one should consider when implementing the light momentum change method for measuring forces in an optical tweezers setup. A system based on this principle provides a direct determination of this magnitude regardless of the positional response of the sample under the effect of an external force, and it is therefore to be preferred when in situ calibrations of the trap stiffness are not attainable or are difficult to achieve. The possibility to obtain this information without relying upon a harmonic model of the force is more general and can be used in a wider range of situations. Forces can be measured on non-spherical samples or non-Gaussian beams, on complex and changing environments, such as the interior of cells, or on samples with unknown properties (size, viscosity, etc.). However, the practical implementation of the method entails some difficulties due to the strict conditions in the design and operation of an instrument based on this method. We have focused on some particularly conflicting points, such as determining a process to systematically set the correct axial position of the system. We further analyzed and corrected the non-uniform transmittance of the optics and we finally compensated for the variations in the sensor responsivity with temperature. With all these improvements, we obtained an accuracy of ~5% in force measurements for samples of different kinds.

Experimental results show that the sensor output is equal to the drag force applied on samples of different sizes and materials.